So here we are at the end of the year, with a final round up of a month’s media consumption and my top favourites of the year.

It’s been a month of serials, with some over-dosing on the British Royal Family: Victoria Season 2 and The Crown Season 2.  At times they almost seemed to blur together (queens with husbands who want to be more than the consort…), and both are full of historical inaccuracies too, but still compulsive viewing.

As a break from all that, we watched series two of Jordskott which I think may have been better than the first?  Not sure.  It was also the last episode ever of The Detectorists, and such a perfect ending it was too.

Our Boxing Day afternoon was spent watching Star Wars: The Last Jedi at the cinema and the evening with Dr Who Christmas special on TV.  The former was the usual adventure and I enjoyed it, and the latter….well…we did get to meet the new (female) doctor, but it wasn’t a particularly great episode for Peter Capaldi’s last appearance,

Best Film of 2017: Sami Blood. This Swedish film from 2016, was definitely the highlight of my film viewing year.  Seen at the New Zealand Film Festival, the story and images have stuck with me.   The best film from 2017 is one I have just seen on Netflix, The Meyerowitz Stories (New and Selected) .  It’s another film from Noah Baumbach, whose work I now realise crops up again and again on favourite lists (Frances Ha for example).

Best series: so hard!!!  I’m going to go for Stranger Things on Netflix and Line of Duty, back in April, from the BBC. Very different, both just caught the imagination in very different ways.  Like many people, we binged on Stranger Things and are already looking forward to series 3 (and hope to see more of 11).  Line of Duty continues to impress, both in storylines and production.  The Guardian review of it here says it all really.

Best comedy:  The Detectorists – no competition here!   How to describe this little comedy perfection? Beautifully written by Mackenzie Crook, it tells the tale of two men and their metal detectors.  It is a gentle comedy, beautifully performed and just a little gem.

Special mention: Gilmore Girls which I binged on earlier this year and still miss.

I’ve not really listened to anything new in the podcast world this month, and still pick up BBC radio plays and comedies as usual too, so let’s go to the favourites of 2017.

Best radio programme:  I’ve listened to so many…plays, documentaries, series, but will go for BBC’s The Digital Human which is also available as a podcast. It’s a great series about the digital world, and always interesting.

Special mention: The Archers – the long running radio soap opera that is compulsory listening every morning on the podcast.

This month I finished The Essex Serpent by Sarah Perry,  a book I struggled with, finding this Gothic late Victorian tale irritating for some reason, or maybe it was the main character? It has had good reviews, but was not for me.  I am also struggling with Kate Atkinson’s Life After Life, which is almost exactly the same story line as Paul Auster’s 4321 (one life with different endings and paths), but not nearly so interesting. But not all my reading has been dull.  Liane Moriarty never fails to produce a book to read over a day or two and keep you interested, and she did it again with Truly, Madly, Guilty.  I also quite enjoyed New Zealand author Pip Adam’s latest book, The New Animals, and thoroughly enjoyed another in the fun series by Lilian Jackson Braun about the journalist turned detective Qwilleran and his two cats, Koko and Yum Yum. 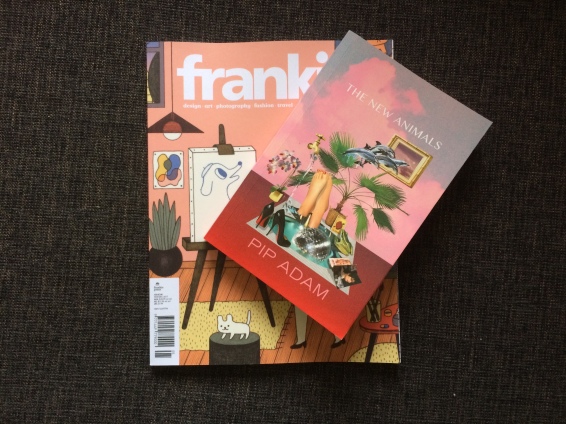 Best book(s):  Another tough one….my top three are Paul Auster’s 4321, Eleanor Oliphant is Completely Fine by Gail Honeyman and New Zealand author Laurence Fearnley’s The Quiet Spectacular.  I’m going to nominate the last of these, as it is a New Zealand work, as my best book of 2017.

Best magazine: Frankie without a doubt.  And there is a podcast now too.

Special mention: Favourite new cook book award goes to Unna Burch The Forest Cantina, not only because it is local, but also has great recipes that can be easily cooked in a domestic kitchen with ingredients that are readily available here.

What were your top films, podcasts and reading this year?