I hate snow. No, let’s put that into context: I like looking at snow in the distance, and a snowy landscape can look beautiful, but snow in the city where it turns to grey slush, creates knee deep piles of filthy mess to wade through at street crossings and generally means a slowing of public transport and dirt everywhere is not fun. I hated those snowy winters in Copenhagen, and love the fact that I now live in a city that gets  snow once every sixty years.

So, seeing snow, proper white stuff that is, this week was…well, interesting! It sat where snow should sit – on a mountain – and I only had to look at it, so all was well, and it was almost fun (almost!) to see some again.

On Wednesday we drove the 64km to Squamish, taking advantage of a relatively clear and dry day.  The drive was beautiful, and gave us a great opportunity to see some of the stunning landscape of British Columbia. We stopped at the Sea to Sky Gondola, and took the opportunity to ride up to the top to catch the views. We were not disappointed (see featured image above for example).

There was one almost scary moment. As we were waiting to go back down, the gondola system came to a halt, leaving people dangling in the air. It turned out a child had mistakenly pushed the emergency stop button, so all was well and easily remedied in two minutes, but I sure was glad not to have been left hanging!

From there we drove on to have lunch at The Water Shed in Squamish. We both opted for fish and chips washed down with a local beer. It was a great day out and we had some spectacular views. And just a little snow! 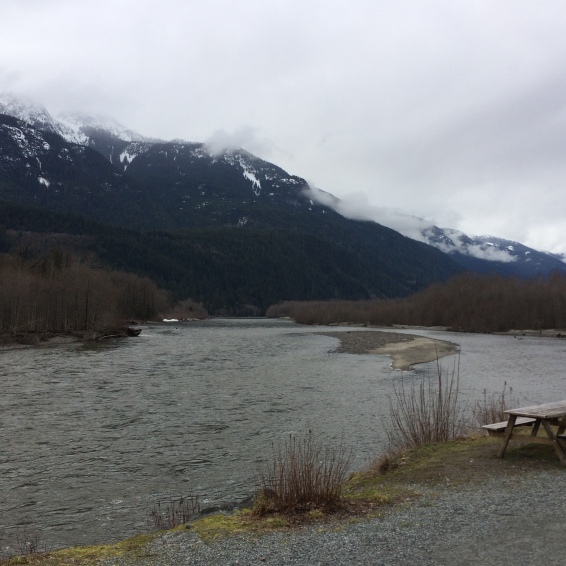