Here we are at the end of July, and time for another round up of media consumption.  There’s been a lot of listening and watching, and not as much reading as I would have liked.  I need to carve out some time in my day for more of that.  Anyway, here are some of the things that have been watched, listened to and read this month.

In terms of drama, we’re watching the latest BBC adaptation of Joseph Conrad’s The Secret Agent.  As ever, there are some slight changes to the book, but it is a good drama serial nontheless.  Moving on to things in French, we also enjoyed the comedy series Au Service de la France, about spies in 1960.  Great, silly fun and also worth watching.  In Swedish this month (this household is nothing if not multilingual in its viewing habits), we watched a really interesting documentary about Maj Sjöwall and Per Wahlöö who wrote the Martin Beck series of detective novels.  It was particularly interesting to see how they wrote the books, painstakingly planning the plots and character details. Note: Sjöwall and Wahlöö: berättlesen om ett brott was on SVT and only has Swedish subtitles.

I also went to the cinema twice, to see The Dancer which I talked about in last week’s post and Love and Friendship which was featured in my last post.  I’d give The Dancer 6/10 only because the changes to Loie Fuller’s real life story were so drastic, though it was beautiful to look at and well acted.   Love and Friendship gets 9/10 for costumes, humour and acting (and I’ll need to re-read Jane Austen’s novella, Lady Susan now).

I’ve rediscovered BBC’s Desert Island Discs, one of the longest running radio programmes, in which a guest is invited to choose the eight pieces of music they would take to a desert island.  You can subscribe or download the podcast version of current and past episodes, including a whole back catalogue.  I particularly enjoyed the episodes with Tom Hanks, Hugh Bonneville and Gloria Steinem.  It is an interesting series, and how guests come across is quite fascinating – there are the ones who pick music they genuinely love and ones who you feel are trying to hard.

I love early morning podcast listening to either The New Yorker Radio Hour or This American Life, or catching up on episodes of How to be Amazing with Michael Ian Black and Design Matters with Debbie Millman.  When pottering in the kitchen at weekends, I have been catching up on two seasons of  Radio Cherry Bombe hosted by Julia Turshen on Heritage Radio Network.  These episodes are from a couple of years ago, but are great listening, and feature interviews with women in the world of food.

Two very different earworms this month: Cool Me Down by The Black Seeds and the song I find myself humming in my head walking to work, Ariana Grande Into You.

This month on the detective novel front it’s been Donna Leon again.  Her books are always well written, easy to read and have wonderful descriptions of food.  At last I got round to one of my favourite authors, Scarlett Thomas’ The Seed Collectors.  It’s a great read, and as usual, full of fun details that stick in your mind and just a little magic to keep you intrigued.  If you enjoyed Pop Co or The End of Mr Y you’ll enjoy this.

Charlie wants to pick something to read (and no, he shouldn’t be on the table) 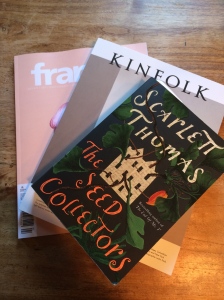 Relevance of featured image? It’s Swedish, which ties in to the watching and it is about food growing and that relates to the listening. Tenuous I know…..