If you’ve been following recent posts, you will know I have been traveling, and so have not done a small pleasures post for a few weeks.  This past week involved spending 24 hours in 3 different aircraft to get us from Scotland to New Zealand, which I can honestly say is not a pleasure at all!  Despite that, there were some small pleasures this week.  Thanks once again to A New Life Wandering for the idea.

1 Being in Scotland and seeing friends and family

The title says it all really doesn’t it?  After two nights in Aberdeen and two in Glasgow (see post here), we went to Edinburgh last Monday (I write these posts on a Monday, New Zealand time).  You can read about some of what we did there here.

Being away offered up lots of chances to eat out.  If you are in Edinburgh and in need of cake, I can highly recommend The Manna House Bakery and Patisserie on Easter Road.  There are so many delicious things to chose from, and there are a few tables so you can eat in with a cup of tea or take away. The breads looked good too. I opted to try the orange polenta cake, which was excellent, and Karl said his banana bread was equally good. 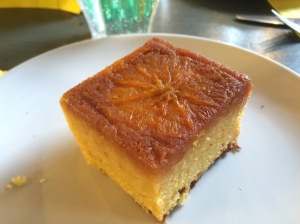 As we were home earlier than we thought, I managed to fit in a Pilates class on Saturday morning despite the awful jetlag.  It was good for me though!

6 Being back in New Zealand

I quite often have problems with my passport at smart gates, and coming back into New Zealand this time was one of those occasions. The immigration officer asked me if I had had a nice holiday and welcomed me back to New Zealand (yes, they do that here). Yes, I had a great time and Europe and yes, it was good to be back in Wellington.

Note the change of design/format – still working on it!!