As those of you who have followed this blog for a while might know, we have had a few visiting cats pass by, and through, our house.  From Misse Moj to Charlie 1 to Charlie 2, and the others that pop by, they have all brought us joy, cuddles, worry and reminders of the joys of fur balls.

Without doubt, Misse Moj (real name Louis), our first cat visitor, remains our favourite.  He loved to cuddle and be cuddled, liked an adventure, to sleep close to us and steal bits of fish from the kitchen.  He disappeared one night, and neither his real family nor ours ever saw him again.  We all miss you still. 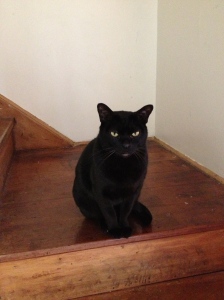 Misse Moj lived with Casper, a beautiful grey cat, who still occasionally pops round, sometimes venturing into the house, but never staying long.  Our next door neighbour’s cat, Bodie, also sometimes ventures into our space, but after being scared off by a ferocious Misse Moj when he first arrived, he is still cautious about our home. 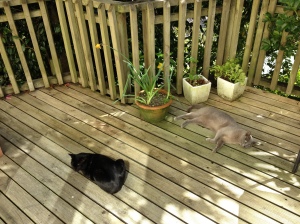 After Misse Moj disappeared, Charlie, a grey tabby, took over his space (to be honest, he had been watching for a chance to move in for a while).  A very different character from Misse Moj, he liked to hide and sleep under the throw on one of the sofas downstairs, as well as fight with the rug.  I believe he had a ‘thing’ about tassels, as he loved spider plants too. 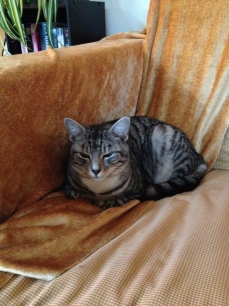 Charlie moved away, and after several catless months, another Charlie appeared. A small, black, fluffy cat, he paid occasional visits at first, sometimes using our house merely as a good place to sleep. He had a collar and a bell, and was clearly, like our other visitors, a well-loved pet.  Charlie disappeared for a few months, returning one day when our front door was open.  I was upstairs and heard a little bell, and came downstairs to find him meowing loudly as if he had never been away.

This Charlie turned out to be quite a character, always asking for food, demanding that we slept or sat in certain positions, and increasingly began to spend more and more time with us.  However, as time went by, we gradually became more concerned about him.  He turned from a well-groomed cat with a collar to a rather shaggy looking creature.  One of the neighbours and I both agreed that he seemed to be homeless, living off the generosity of cat loving humans like ourselves.

He turned up one evening earlier this week with a weepy eye and even more bedraggled than ever.  I managed to fine the owner’s phone number I had written down when he first started to come around, and called them  It turned out they had not seen him for a couple of months and had thought he was lost.  Talking to them, it became apparent that this is a cat with wanderlust.  A pedigree, he originally lived in the Newtown area of the city.  He walked the 6km to Northland, where his real home is now, and was eventually adopted by his current owners, who took him in when he refused to move back to Newtown.  Charlie quite clearly has an appetite for adventure and has been locked in an Italian restaurant over an Easter weekend, slept on the pews at Old St Paul’s church (a 30 minute walk for humans from his base) and slept in a bridal shop in Kelburn as well as visiting several homes in the area.

Reunited with his real family (Operation Charlie to get him collected took some co-ordination as you can imagine), he has visited the vet, been wormed and groomed…and got a new collar.  And how do we know he has a new collar?  Guess who came to call this morning…..

The title of the blog comes from James Herriot who wrote that “Cats are connoisseurs of comfort” – how true.