And so to the final post of 2015 and the usual end of the month round up of what I’ve been watching, listening and reading during December.  I’d love to hear from any of you what you’ve been consuming, media-wise and maybe pick up so me new ideas.

We went to see ‘Star Wars’ on Boxing Day as I wrote about here.  Loved it (and one of my nieces was one of the special effects animatronic designers).  On the small screen, we finished watching ‘The Bridge’ series 3, which was as daft as ever.  We also caught ‘And Then There Were None’, a three part adaptation of Agatha Christie’s novel.  The adaptation was quite dark and added some ‘modern elements’ ie sex and swearing, but it was really well produced and great viewing.  For some light relief we re-watched the first series of ‘Uncle’, a BBC3 comedy, and for some culture ‘Rudolf Nureyev: Dance to Freedom’ an interesting docu-drama about the dancer’s escape to the west in 1961.  And yes – we do mostly watch things from the UK!

Things to watch next year – any ideas?  I had a quick look to see what films were coming out in 2016, and recoiled with horror at the thought of ‘Bridget Jones Baby’ (why?) though ‘Zoolander 2’ might be worth a watch on a long plane journey.

Oh and I also watched the sea… 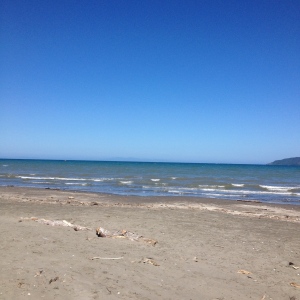 I started the new series of ‘Serial’ and have given up.  I’m just not interested enough in the story or want to hear about torture and imprisonment by the Taliban.  Instead, I’ve been listening The Lively Show, some podcasts by Lena Dunham and an interesting account of an unsolved murder from July this year ‘Who Killed Elsie Frost?’. Of course, BBC radio continues to turn out little gems like ‘Suggs: My Mad-Life Crisis’ which was a delight even if you are not a fan of Madness (ie the band from the UK).  Ideas are always welcome for new things to listen to.

I looked over what books I had read this year, and I can honestly say 90% were detective novels.  They were a good escape from work and easy to pick up and read.  I have started Michel Faber’s ‘The Book of Strange New Things’ which I am enjoying so far.  Lined up for next year, along with more detective novels no doubt, are ‘The Writing Class’ and ‘The Writers’ Festival’ both by New Zealand writer Stephanie Johnson. 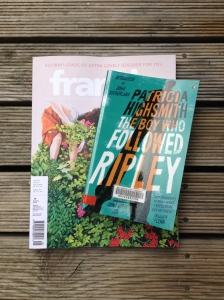 Magazines and detective novels – the staple of 2015

Well, that’s it for this year, highlights of which include New Caledonia in January, seeing quite a bit of dance, weekend trips to Melbourne, Martinborough and New Plymouth, meeting new people and enjoying some good food.  Happy New Year and may 2016 be a good one for us all!