It was with great joy that I left work early on Wednesday to meet Karl and catch a flight to Melbourne.  As soon as I checked in, I felt in holiday mood. The flight over the ditch was, well, a little bumpy at times, but flying around New Zealand, you kind of get used to turbulence!  I watched the movie “Paper Towns” which was surprisingly good, and as usual a couple of episodes of “New Girl”, without which no flight would be complete (why is that always available and why do I always watch it?).

It was quite late by the time we checked into our hotel, so we pretty much did nothing but grab a quick dinner and flop on the bed in front of television. We spent the first night at the Stamford Plaza hotel (Thursday was a working day for Karl). Our room was on the 15th floor, and the view down is not one for those who suffer from vertigo!

View from the window 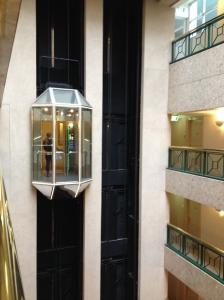 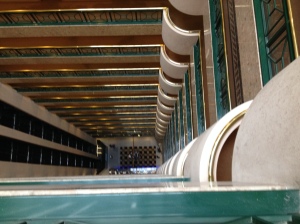 Photo taken without looking down 15 floors

While Karl went to work, I decided to go shopping.  Melbourne is a great city for that activity, especially when coming over from New Zealand.  Prices aren’t hugely different, but the choice is, and there is a far more international mix.  I headed for Emporium, and after a fortifying cup of tea and grabbing a bottle of water, I headed to the shops.

I spent ages in Uniqlo, picking up quite a few things, then headed to Muji for some stocking fillers and a couple of other items. 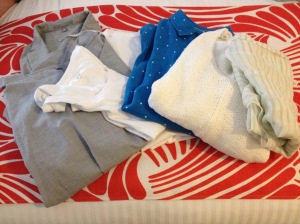 Some of the haul…

As a break from consumerism, I stopped to take a look at St Francis, the oldest Catholic church in Melbourne.  The foundation stone was laid in 1841, and it remains a busy city centre church, reputedly the busiest church in Australia.

From there I headed over to Trunk on Exhibition Street for lunch, which boasts the largest outdoor beer garden in the city.  It is also where you can find a 150 year old coral tree, from which the restaurant takes its name.  I opted for a salad with roast pumpkin, charred broccoli, pumpkin seeds, nigella seeds, tomato, spinach, alfalfa and hummus topped with a lemon zest dressing and pickles, to which I added an egg.  Since I was on holiday, I had a glass of pinot grigio.  It’s a busy place, so if you want lunch, get there early.  There are several different parts to the restaurant, and it would be good to go back one evening and try a different menu.

From there I wandered about, stopping at Cos for some more shopping, then sitting for a while on Bourke Street, listening to a guy playing guitar.

By then I had had enough, so wandered back to meet Karl, move to our other hotel and have dinner – but more of that in the next post!