A couple of weeks ago, I was formally welcomed to the organisation I now work for with a whakatau, a Māori term to describe a formal speech of welcome.  It is a traditional way of welcoming and introducing people when not on the marae (community meeting place). Although we had been given a very short briefing session, I really had no idea what to expect.  The opening was made by one of the Māori speaking male members of staff, welcoming the 12 of us new employees. Although I don’t know exactly what was said, I do know it was a speech of welcome at least. After some music, we each had to go up in front of the audience of colleagues with our manager, who presented themselves, said something about their new staff member, and then left the floor to us to give a short introduction or mihi about ourselves.  Well, as we were encouraged to say something in our own languages, I decided to say ‘good day’ in Polish, Swedish, Māori and English, before telling a short story involving my mixed background and family. At least a few people laughed, so it wasn’t too bad a speech! Finally, we were all lined up for hongi, (when you press your nose and forehead at the same time to another person), with the senior management team.  And of course, there were sausage rolls and cake afterwards.  It actually proved to be far more interesting than I anticipated, as we all had quite different backgrounds, came from all corners of the globe, and shared various things with our audience, as we were welcomed into the whanau or family of the organisation.

I don’t suppose people outside New Zealand or those visiting on holiday fully realise that New Zealand regards itself officially as a bicultural country.  This idea is, however, contested, as New Zealand is in essence a multicultural society that officially recognises the cultures of many different peoples, not just of Māori and Europeans (Pākehā).  This blog is not the place to discuss the whys and wherefores, but it is worth noting that government agencies have Māori as well as English names, and traditional Māori welcome and farewell speeches and ceremonies are often performed at official functions.

The marae at Waitangi

One consequence of this duality has been getting the opportunity to learn a little Māori language and culture as part of my professional development at work.  I had the first lesson this week which proved to be a lot of fun with a very different teaching style to that I have experienced learning other languages. The teacher used rods (you may remember them from primary school – those coloured wooden blocks that were used to teach us about numbers), and in lesson 1 we learned colours, how to ask for something, and a simple singular and plural.  I really liked the visual element, which I find something I use to learn and memorise things.  All I need to do now is to remember to do my homework!

And the canoe journey in the title?  Well, not a physical journey, but a metaphorical journey that we will make in class as we learn some basic Māori. 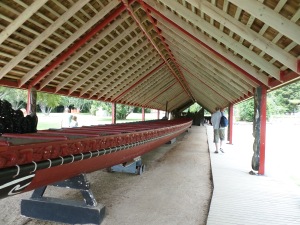 The waka or canoe in Waitangi 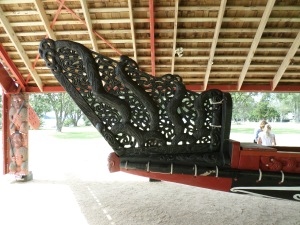 Each lesson begins and ends with a prayer, the first two lines of which are:

These are the cold winds that we don’t look forward to, hence the wish for them to stop, but also signify the clearing of our heads from work tasks before starting our language lesson.  But it isn’t the winds of the south and west that are concerning Pacific islands at the moment, but Cyclone Pam, which has hit Vanuatu and other countries in the area. The capital, Port Vila, is apparently littered with debris, uprooted trees and downed power lines, and there are reports that some remote villages have been completely destroyed.  The death toll is unknown as I type on Saturday afternoon.  New Caledonia which we visited in January, seems to have missed the worse of this Category 5 storm.  It is expected to weaken but may still hit the north east of New Zealand on Monday and Tuesday.

Meanwhile, the cricket world cup continues, with New Zealand beating Bangladesh yesterday.  I have absolutely no interest in cricket, but it is impossible to escape what is going on, no matter how hard you try. 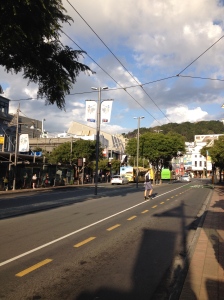