This week just seems to have flown by, and as the weekend approaches, we are keeping our fingers crossed that the nice sunny weather holds.  Monday proved to be an interesting day, at least as far as the weather went.  By lunch time, the temperature had gone up to 18C, complete with lovely sunshine.  Then suddenly, it all changed, the temperature dropped to 10C, and the rain and wind blew in.  The NZ Metservice had some spectacular pictures on their Facebook page of the storm coming in that are well worth viewing.

Since then it has been mild and we have had a good deal of sun, so I was able to plant out some petunias in the pots on the terrace. 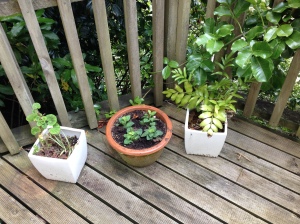 4 little petunias in the middle

It was also a week for earthquake news.  There was a 5.1 quake in the Bay of Plenty on Monday afternoon, right in the middle of when I was teaching, and during the stormy weather.  It was far away, but deep, so we did feel a small shake of the building as I was in the middle of my lecture which was a new experience for me!  In actual fact, the quake was felt as far north as Tauranga and as far south as Timaru on the South Island.  There was further quake related news this week with the announcement that an additional fault, named Aotea, has been identified under Wellington harbour.  Not a new fault, but a newly discovered fault, with the last big quake seen in its geological record 6200 years ago.  The majority of press reports really exaggerated this new information out of all proportion.  One geologist I heard interviewed on the radio, on when asked if this new discovery should change city planning, was completely at a loss how to answer.  In other words – this fault has been here all along – it is nothing new – we humans just found it.

Anyway, putting aside mother nature’s events of the week, I was lucky this year to get a ticket for the World of Wearable Art.  How to describe it?  Well, it is an annual event where artists create costumes, or wearable art, some of which are quite fantastic. The finished products are present in an evening of music, dance and performance, all adding up to quite an event, where “fashion, art and theatre collide” as it says on the website.  Of course, we were unable to take pictures of the event, but here are a couple I took in the foyer before the event. 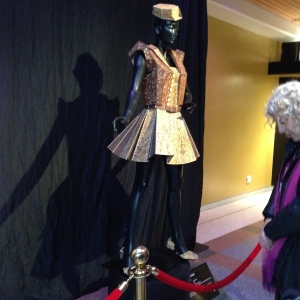 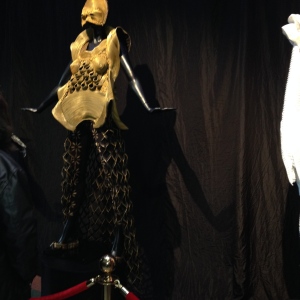 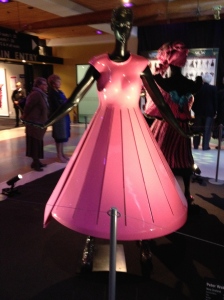 Within the competition, there are various categories such as one around the theme of the South Pacific (from which the winning entry came this year) and the ‘bizarre bra’ category which had some spectacular designs as you can imagine!  I bought the excellent programme which featured pictures of all the designs and which also highlighted just how many people, from performers to make-up artists to the production crew, are involved in this spectacular.

To get a good feel of what it is about, check out the YouTube channel, where you can see the Supreme Winner (a designer from New Zealand) and other prize winning designs.  And should you be in New Zealand and in Wellington next year, make sure you get tickets.