Well, sorry, but it is yet more about food…promise to write about something different next time!  Actually, I should be writing about the dance we went to see last night, but I’ll put that in the next blog. I guess food and food matters are on my mind right now for different reasons. Firstly, I signed up for an evening class on making French patisserie.  It is a four week course and I hope it will be fun.  I had better start doing more in the gym though I think if the house gets filled with pastries!

Secondly, we are coming up to birthday season in the family as well as having a small ‘at home’ or housewarming party at the end of the month, so I am pouring over cake recipes for the former and thinking about what food to make for the latter.  Thirdly, I have volunteered to make biscuits for the Swedish society’s Lucia event (you’ve probably seen pictures of it – it is the one where the girls wear candles on their heads – check out Wikipedia!).  This is normally in December, but since we are in the southern hemisphere, it is being held in June at the winter solstice, when everyone in Sweden is celebrating midsummer if that makes sense! Anyway, this is my biscuit dilemma, as it is years since I made big batches of biscuits.  After my not very pretty to look at, but very delicious, chocolate chip cookies at the weekend I won’t be making them at least. 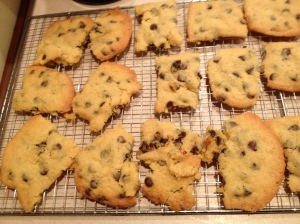 They tasted good though!

I used 125g butter, 1/2 teaspoon vanilla essence, 75 g caster sugar, 75 g brown sugar and 1 egg, which I beat with my electric mixer, before adding 150g self raising flour and a good amount of chocolate chips.  I then baked them for 15 minutes at 180C.   I don’t know if the mixture was too soft or if I just hadn’t spaced them out enough, but they all sort of joined together.  Still, they disappeared very fast.

Tonight we felt lazy so walked down to the Shepherd’s Arms in Thornden for some pub food.  I had some good fish and chips with a good, rough-cut homemade coleslaw and the boys had sausages (again!) and mash.  It is just as well we have to walk uphill from there to get home for a bit of exercise after all that food!  http://www.shepherds.co.nz/